The Nazca Lines are the biggest collection of geoglyphs in the world. These etchings in Peru’s Nazca desert take the form of lines, plants, animals, and mythical beings. These were created by people who were around long before the Incas.

The Nazca lines remain one of Peru’s greatest mysteries. Over the years, an assortment of theories has arisen to explain their existence. Scientists still remain puzzled by the exact purpose of the Nazca lines.

If you are visiting Southern Peru, you too can marvel at these ancient designs in the sand.

In this article, I will tell you how to visit the Nazca Lines. I’ll also help you decipher fact from fiction in the history of these gigantic impressions. 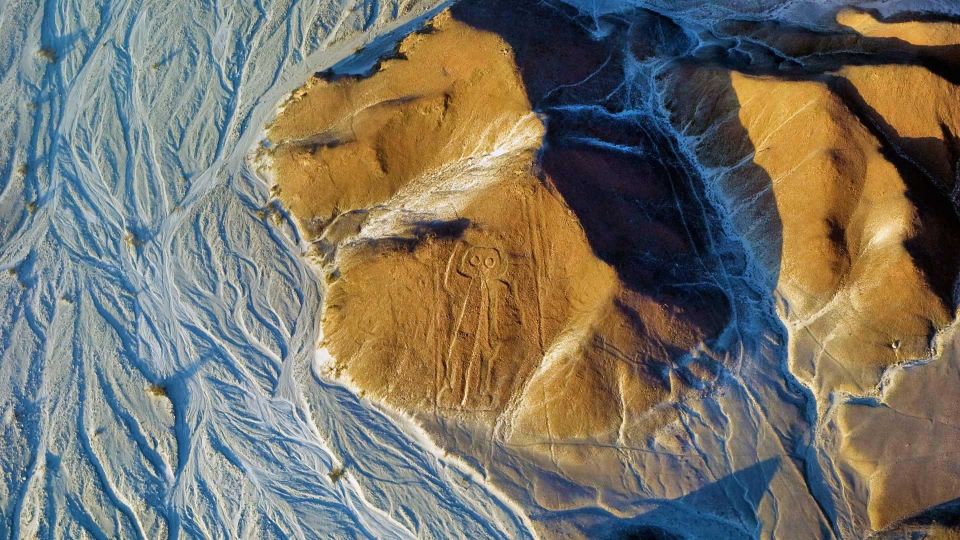 Where Are The Nazca Lines?

The Nazca Lines are located about 400 kilometres / 250 miles south of Lima. The shapes are located in an almost 75,000-ha area of the Nazca desert.

This part of the plateau is known as Pampas de Jumana and located between the towns of Nazca and Palpa. The most famous shapes of the Nazca lines are just south of San Miguel. 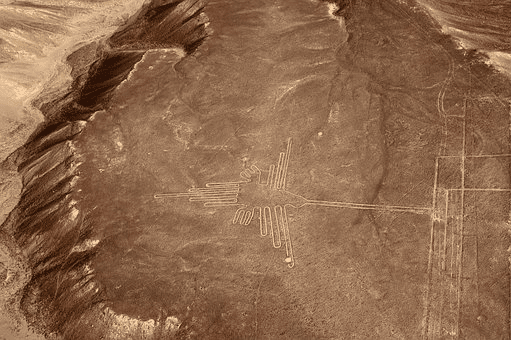 What Are The Nazca Lines?

There are many theories about what the purpose of the Nazca Lines was.

For a long time, the accepted idea was that the markings are astrological markers. The designs show where the sun, moon, and some stars rise and set on important days. For example, when the Summer Solstice and Winter Equinox occurs.

Other researchers proposed that the patterns represent star constellations or counter-constellations. Counter constellations are the dark patches between stars. This has been disproved by more conclusive research over time.

In 1985, an archeologist named Johan Reinhard published a new paper on the matter. He proposed that the lines were markers for rituals and worship locations. The lines were likely used to conduct ceremonies for summoning water. This idea has been backed up by the fact that many animal figures are linked to rain or crop fertility in ancient Peruvian culture.

There is no real way to prove or disprove this theory. In the future, we might draw other conclusions based on new discoveries made on the Nazca lines.

Looking for a short tour? Here are my 3 favourite tours of the Nazca Lines:

How To See The Nazca Lines

The best way to see the Nazca Lines is from above in a small aircraft. This is especially true for the larger shapes which you won't be able to make out from ground level.

Where To Book Nazca Lines Flights

There are several airports located in towns near Lima that sell Nazca flights. Flights from the town of Nazca are the cheapest by far. You can expect to pay between $80-$100 for a 30–40-minute flight.

Pisco airport is a small airport in the beach town of Paracas, located roughly 400 kilometres / 250 miles by road from Lima. Pisco airport almost exclusively offers flights over the Nazca lines. These flights are longer (1 hour and 40 minutes) and more expensive (from $250).

Nazca Lines flights depart daily from both airports in Pisco and Nazca.

What To Expect On A Nazca Lines Flight

You should arrive at the airport at least 30 minutes before the flight to see the Nazca lines. Small planes take 10-12 people, and everyone gets a window seat so they can see clearly over the landscape. If you are tall, your legs will probably be a bit cramped on these smaller aircrafts.

Over the Nazca desert, conditions are quite gusty. In a small plane, you will feel every move and jolt. If you have never flown in a similar craft, prepare for some stunt moves. The pilots dive and bank so that passengers have a better view of the lines. It’s worth taking motion sickness pills along (and noting where the bags are stored!).

The pilots are good at making sure everyone sees all of the lines. They usually give a heads-up on when and where to point your camera. Flights last about 30- 75 minutes.

When Is The Best Time To Fly The Nazca Lines?

I recommend that you take a morning flight. This is when the sun is not directly overhead, and shadows make the lines clearer. You will be able to clearly see the different animals and patterns at this early light.

Also, earlier in the day, there is usually less wind. This makes for smoother, more enjoyable flying conditions.

Looking for a short tour? Here are my 3 favourite tours of the Nazca Lines:

Can I see the Nazca Lines from the Ground?

Even without a flight, the designs and patterns of the Nazca lines can be seen from high vantage points. You just need to get up into the surrounding hillsides.

There are also observation towers set up near Nazca. The most popular of these viewing towers is called the Pan American Road Mirador. From this observation tower, you can see the tree, hands, and some of the lizard formations. From Nazca, you can take a bus to the tower for 10 soles. You will pay another 3 soles to climb up to the platform.

Once you have spent some time at the viewpoint, take a short walk (about 1 km / 0.6 miles) back towards town. There is a small hill where you can walk up for free. From the top, you will have a 360° view of the Nazca lines in all directions.

When you are ready, you can wait on the roadside for a bus. Make sure you are standing on the correct side of the road. If you wave them down, a 9/10 bus will stop for you. The fare is only a few soles.

Please Note: There is zero shade around the hill and only a small roof over the viewpoint. Take plenty of water, wear a hat, and lather on the sunblock.

Below is a brief and fascinating history of the Nazca lines.

Who made the Nazca Lines?

Almost 2000 years before the Incan Empire, ancient people living in the Nazca desert etched these giant images into the sand. The Nazca lines were created in two different phases:

It is believed that the Nazca people are responsible for creating most of the lines.

A few of the geoglyphs pre-date even the Nazca culture. These are attributed to the Paracas people. Most Paracas remains are found in the nearby regions of Pisco, Ica, and Chincha.

Scientists confirmed the age of these lines using advanced carbon dating technology. They also examined stakes that had been left in the lines. These stakes were used for marking out the designs.

Where to stay? Here are 5 of my favourite accommodation options in and around Nazca:

How Were The Nazca Lines Made?

The desert is covered in stones and sand coated with iron oxide. This gives the surface a deep red color. The lines were made by scraping depressions in the desert surface. Stones were also removed to expose the light grey soil below. The lines of pale earth stand out from the darker surface.

Who Discovered the Nazca Lines?

The Nazca lines were first mentioned in literature in 1553. A Spanish author named Pedro Cieza de Leon noted the lines in his book ‘Cronicas del Peru’ (Chronicles of Peru). He described the lines as trail markers.

In the 20th century, commercial and military pilots saw the lines on flights over the area. Before the invention of airplanes, it was impossible to make out the shape of the designs from ground level.

In 1940, Paul Kosk, an American historian, became the first person to actually study the Nazca Lines. Together with other academics, he suggested that the lines were astrological markers. 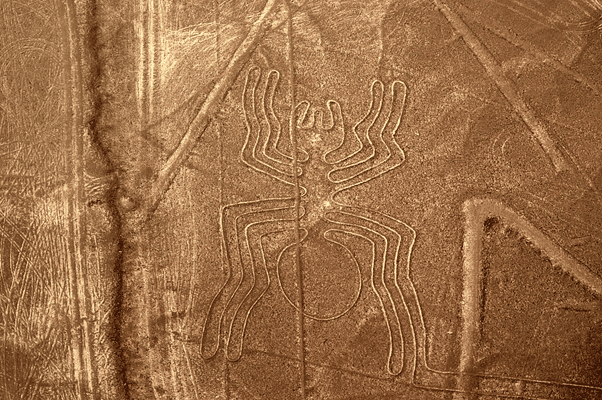 How Many Nazca Lines Are There?

By 2020, more than 1200 Nazca Lines had been identified. This includes around 800 straight lines, 300 geometric forms, and almost 70 figures of animals and plants.

The following are some of the most famous Nazca Lines shapes:

A Nazca Lines Cat was discovered in 2020. This figure is on a steeper slope and has undergone some erosion. It is not as clear as the other figures.

There is also a whale, cactus, duck, lizard, and llama amongst others. Researchers believe there are a lot more Nazca Lines to be found. 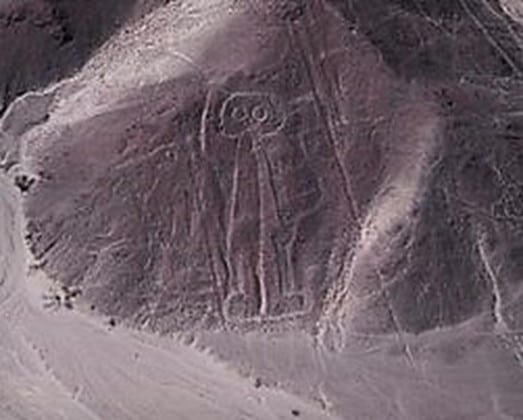 Humanoid forms are surprisingly rare amongst the Nazca designs. One famous human figure is the Nazca Lines Astronaut. People who first saw this design thought it resembled a man in a spacesuit. Of course, this triggered some wild theories about aliens in Peru!

In reality, it is much more likely that the ‘Astronaut’ of Nazca Lines is a fisherman. Recent interpretations show him holding a fish and a net.

How Big Are The Nazca Lines?

Where to stay? Here are 5 of my favourite accommodation options in and around Nasca:

How Are The Nazca Lines Preserved?

Nazca lines were preserved thanks to natural conditions. The desert climate in the Nazca desert is very stable. There is less than an inch of rain each year. On the surface, there is also almost no wind.

Because of this, there has been very little soil movement over the years. This is why we can still see the shapes today. If for some reason, the area experiences weather changes, the lines could easily be washed away.

The Nazca Lines were declared a UNESCO World Heritage site in 1994. This at least gives the area some form of legal protection from human damage.

Were The Nazca Lines Made By Aliens?

Over the years, there has been a lot of debate on the origins of the lines. The mythical-looking shapes have also inspired some theories of aliens. Erik von Daniken, a Swiss writer, was particularly obsessed with the idea that aliens (ancient astronauts) created the Nazca lines. He believed these lines were created by aliens as markers to land their UFOs.

If you want to hear more of Daniken's out-there theories, you can read his book Chariots of the Gods.

Today, we know it was entirely possible for ancient people to create these patterns. They were able to etch out these gigantic forms using tools and methods available at the time. No need for extraterrestrial assistance.

Vulnerability Of Nazca Lines - GreenPeace and Other Damages

Even though they have existed for so long, the lines are superficial. Human impact can easily damage the geoglyphs. The lines have already been damaged on several occasions over the years:

Squatters illegally occupied the area. Domestic pigs roamed around, treading on and impacting some of the lines.

4x4 vehicles damaged some of the Nazca lines. This was during a Dakar rally held outside the bounds of the declared Heritage site.

Greenpeace activists damaged the area close to the Nazca lines hummingbird. Protestors set up a banner as part of a publicity stunt aimed at the UN Climate talks in Lima. Instead of making a statement, they left marks and footprints around the sacred markings. Needless to say, the Peruvian government was unimpressed. One activist was fined. Greenpeace also issued a public apology to the people of Peru.

A truck left tire marks across three of the main images when he made an illegal U-turn. He was arrested and then released as there was no proof of intentional vandalism.