Sacred Valley Of The Incas

The Sacred Valley, or as it is known in Peru ‘Río Urubamba Valley’, was an important site for the Inca Empire and remains a hugely popular site for tourists today.

Anyone who has traveled to Machu Picchu would have probably visited the Sacred Valley. The valley is often a good place for tourists to begin their Machu Picchu adventure as the altitude is not as high as it is on the Inca Trail or at Cusco.

Standing at 3,400 metres, landing in Cusco often brings on altitude sickness and a popular way for tourists to avoid this and acclimatize properly to the altitude is to descend down into the Sacred Valley for a day where the altitude is much lower (average 2,400m).

Located just 15km north of the ancient Inca Capital of Cusco, the Sacred Valley of the Incas was formed by the Urubamba River that cuts through the valley.

Tucked away amidst formidable foothills, the valley is home to a number of isolated villages and colonial towns.

In ancient times, the surrounding hills acted almost like a buffer against the violent Andean jungle tribes that would often raid the highlands.

Although there is evidence to suggest the valley was inhabited as far back as the Stone Age, it was only farmed by the Incas.

In fact, even today the valley is an important agricultural area and many forms of crops are still grown there and supplied to Cusco.

Because of its naturally rich soil, many Inca people settled in the valley and started producing maize on a large scale. The number of archaeological Inca remains still visible today attest to this fact.

Star attractions in the Sacred Valley include the Pisac Market and the lofty Inca citadels of Pisac and Ollantaytambo, however, the valley is filled with other Inca sites that are well worth visiting.

Tourists usually visit the Sacred Valley as part of an organised tour. A standard tour will stop at Pisac Market before getting lunch in Urubamba.

The afternoon will usually be taken up with a visit to the ancient fortress of Ollantaytambo and a quick stop at the Quechua village of Chinchero before returning to Cusco. Depending on your operator, you may also visit the ruins at Pisac.

Most operators will charge in the region of US$20 for the whole trip, however, this does not include meals and site entry fees.

There is also the option of a taxi (US$70) or simply taking a bus by yourself. If you only have 1 day then a bus can be quite tiring, but if you have several days then a bus can be a good idea – cheaper than a tour also.

The Sacred Valley Of The Incas – Things To See And Do 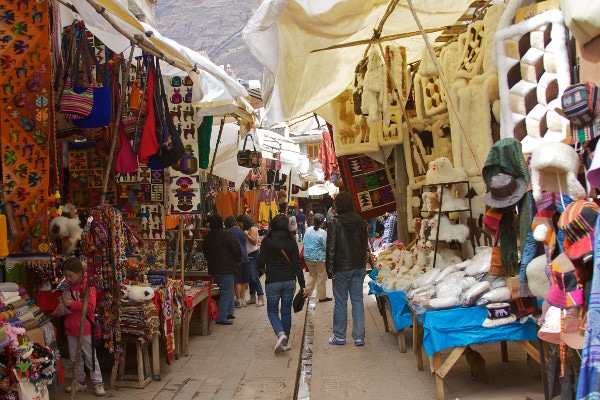 Founded by the Spanish Conquistador Viceroy Toledo, and built strategically on the banks of the river Urubamba, the town of Pisac was constructed over an original Inca settlement. Located 30 minutes away from Cusco, Pisac offers up the best market in the Cusco region.

If you need to buy your relatives back home something, then this is the place to do it. Filled with local produce and a stunning array of locally produced crafts, Pisac Market is bursting with souvenirs. The market sells everything from Alpaca jumpers to finely decorated Andean pottery.

You may even find something for yourself! Although the market is held every day, the biggest day is Sunday when literally hundreds of vendors set up shop. Be prepared to barter for your purchases. 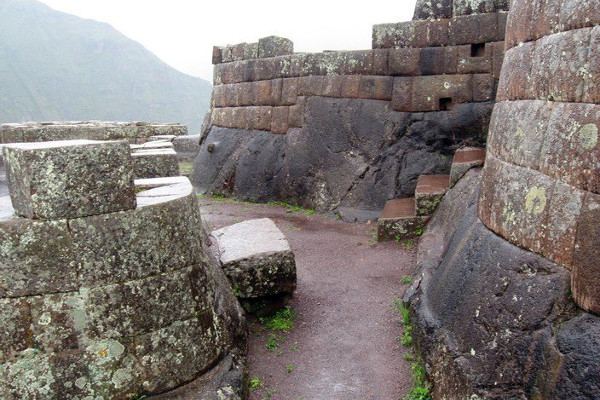 The Inca ruins of Pisac are 20 minutes drive up from the town of Pisac. If you want to walk from the market this is perfectly possible, but takes several hours.

The ruins are located at the top of the hill and you’ll need to pay US$10 to enter. The ruins, which are made up of military, agricultural and religious buildings, are spread over a large distance and most people will take a guided tour around the site.

A particularly good place to see is about a 30 minute walk down the agricultural terraces where the ‘Royal sector’ is located. This area boasts a lovely moon temple of a quality which is very similar to that found at the ancient citadel of Machu Picchu. 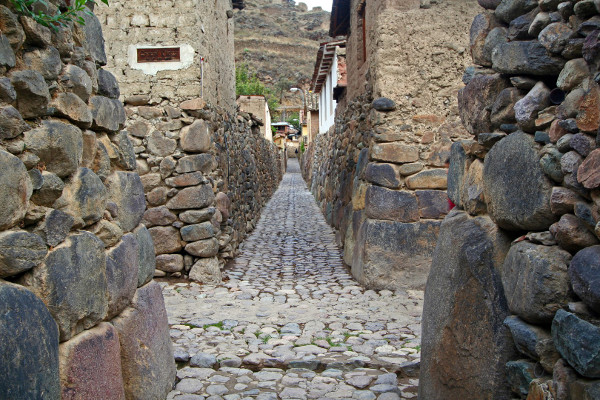 Ollantaytambo is a lovely small little town located at the other end of the Sacred Valley. The town itself is made up of lovely cobbled streets dotted with quaint little cafes and shops.

The town is is the best surviving example of Inca city planning and its tight cobblestone streets have been constantly inhabited since the 1200’s. Ollantaytambo is often considered to be the hidden gem of the Sacred Valley. 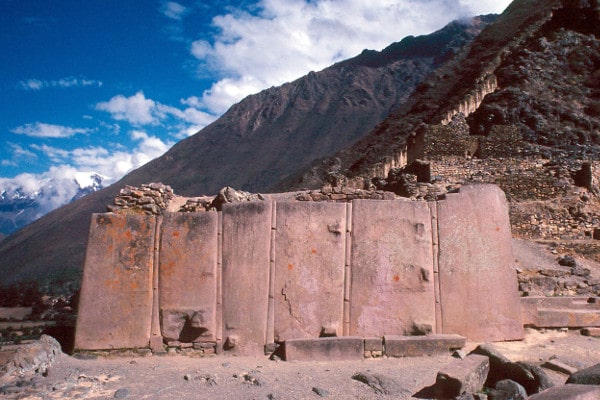 The Inca ruins located here are absolutely stunning and provide some of the finest stone work in Peru. During the time of the Inca Empire Ollantaytambo was the royal residence of the Emperor Pachacuti who dominated the region. Used as a temple and fortress, the finely worked temple lies at the top of the steep terracing and provides a fantastic view across the valley.

Ollantaytambo fortress was one of the very few places where the Spanish actually took a defeat! The site complex was still under construction during the time of the conquest and as such was never fully completed. 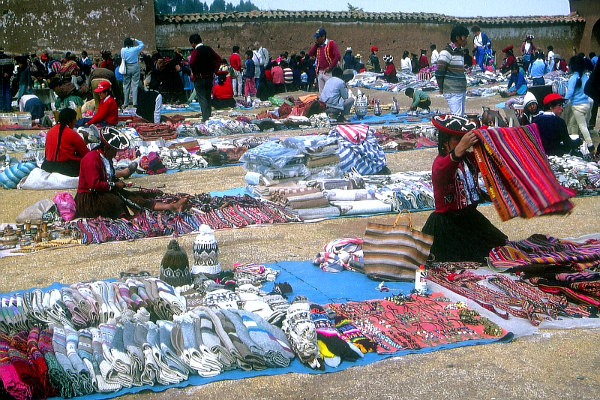 Located 30km from Cusco, the small village of Chinchero sits high atop the plains of Anta at 3,762 metres. The village boasts incredible views across the region with three of the major mountains in the region dominating the skyline – Cordillera Vilcabamba and the snow-capped summit of Salkantay.

The market on Sunday is absolutely fantastic and, although not as big as Pisac Market, is far less tourist oriented. Locals still wander about in traditional dress and the village has a very authentic feel about it.

There are a number of Inca ruins dotted around the village and walking around the area is a lovely way to spend half a day. 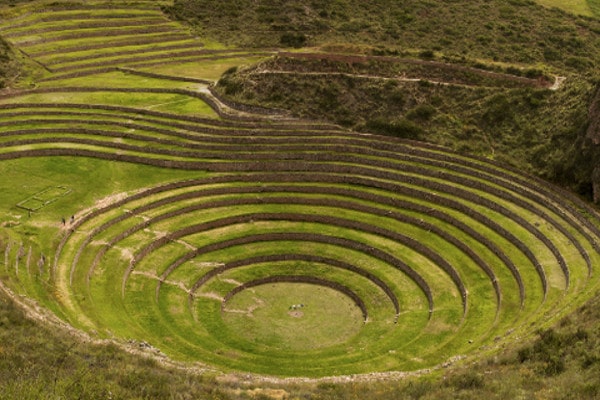 One of the most famous Inca sites after Machu Picchu, Moray is a deeply impressive amphitheater-like terracing site.

A number of concentric terraced levels are carved out of the ground to form a site that is still baffling scientists to this day.

Some people have suggested the site was used as a kind of laboratory to understand the optimal conditions for crop growing.

There are three ‘amphitheater’ like structures and one has been planted with different crops to produce a reenactment of the sites possible use. The site is quite isolated but easily reachable off the main highway. Taxis are always waiting at the turn off and cost around US$8.

If you have any further questions about the Sacred Valley of the Incas then please leave a comment below and we’ll get back to you as soon as possible!