Salkantay Mountain is the highest in the Vilcabamba mountain range. It lies 60 kilometres / 37 miles northwest of Cusco and is one of the most prominent peaks in Peru.

The name Salkantay (or Salcantay) comes from the Quechua word ‘Salqa’ which means ‘invincible, wild or savage’. An appropriate title for this intimidating mountain.

Summiting Mount Salkantay is difficult and can be dangerous, even for experienced mountaineers.

In this article, we will take a look at the significance of Mount Salkantay within local lore. You can also read on to learn more about the history of expeditions up to this icy peak.

How high is Mount Salkantay?

What is Mount Salkantay’s Mountaineering Grading?

On the French Adjectival Scale, Mount Salkantay’s Mountaineering Grading is graded ‘D’ for its difficulty with snow and ice and inclines of up to 75°.

What are the best months to summit Salkantay Mountain?

The best months to summit Salkantay Mountain are from May to September.

Is Mount Salkantay The Highest Mountain In Peru? 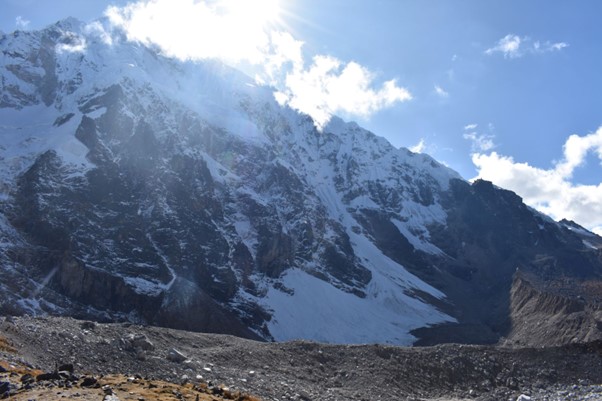 Who was The First Person To Climb Salkantay Mountain?

In 1952, the first successful summit of Salkantay Mountain took place. A French-American party of 9 men embarked up the peak. All but two of the team reached the summit.

The first Peruvian to reach the top of this mountain was Luis Crispin. He summited Salkantay with two Americans (Nathan Heald and Thomas Ryan) in 2013. It took them 9 hours from a high-altitude camp.

A month later (July 31, 2013), Nathan Heald led a second team made up of James Lissy (USA) and another Peruvian, Edwin Espinoza Sotelo, to the summit. Heald is the only person on record to have summited Mt. Salkantay twice.

Up to 2014, there were only 21 successful summits of Mount Salkantay. Since then, a few specialized companies have led expeditions to the peak. These types of tours are highly specialized and designed for seasoned mountaineering enthusiasts.

Fast Fact: The North, South and East sides have all been hiked. The West ridge is a more challenging route that is yet to be climbed.

There have been several bad accidents which resulted in deaths while climbing Salkantay mountain. These tragedies serve as a warning to respect the mountain. Even if you’re an experienced mountaineer, you should think twice before attempting this summit.

1954: Two years after the first expedition, Fritz Kasparek and Anton Wahenauer fell down a crevice close to the summit. Unfortunately, both men died, and the remaining 2 members of their party retreated from the expedition.

The early 2000s: 12 Argentinian climbers perished in an avalanche on Salkantay mountain. The exact date is unconfirmed.

2005: A German man named Nick Cristof attempted to summit Salkantay solo when his partner became sick on the peak. 2 days later, Cristof hadn’t returned to camp. A search was undertaken, but his body was never recovered. 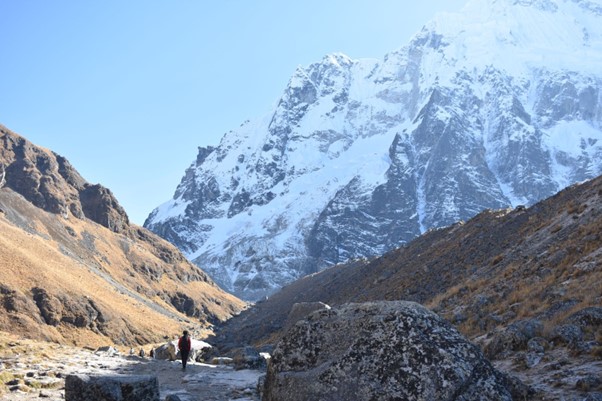 Locally, this mountain is known as Apu Salkantay. ‘Apu’ is a Quechua word for ‘god’ or ‘deity’. Ancient Peruvians saw the mountains as powerful forces, a belief that persists to this day.

Many local people believe that these mountain gods are responsible for governing weather, animals, plants and crops in the area. It is normal to make offerings to ask for good conditions, health and prosperity

The Incas' belief system was tightly woven with the sun and stars. During the rainy season, the Southern Cross sits at its highest point in the sky. At this time, the constellation is visible from Machu Picchu’s sundial. The cross appears directly above Mount Salkantay’s peak.

Partly because of this phenomenon, the Incas believed Salkantay to be one of the main powers controlling the weather in this region, especially rainfall which determined the crop fertility.

At its highest, Mount Salkantay reaches 6271m / 20, 574ft above sea level. It ranks as Peru’s 12th highest peak and the 38th highest in the Andes Mountain range. It has a steep relief which makes it one of the most prominent mountains in the country.

The name comes from the indigenous Quechua language. When directly translated, Mount Salkantay is often called ‘Savage Mountain’. Records of this name go back as far as 1583.

Salkantay peak forms part of a ridge that continues directly north to Machu Picchu. There are frequent avalanches down the mountain side and storms rise up from the humid jungle into the valleys below.

If you are hiking the Salkantay Trek to Machu Picchu, you will see this mountain on your first day. On the second day, you will approach the snowy peak up the pass.

During the Salkantay Hike, you will not climb to the top of the mountain. Rather, you will reach 4,630m (15,190ft) above sea level as you cross the pass in front of this mountain.

Where to stay? Here are 5 of my favourite accommodation options in Cusco:

What You Need To Know Before Attempting The Salkantay Mountain Summit

Summiting Mount Salkantay is difficult, even for experienced mountaineers. You need to have technical experience with mountain climbing in icy conditions. It is essential that you are in very good physical condition before the climb.

The best time to attempt this summit is over the dry season (May-September).

There are very few companies that offer this summit as a guided trek. If you do book with a tour company, you can expect to pay around $1,700 per person.

From base camp, it is a steep and difficult climb. The most typical route taken is along the northeast ridge. During the trek, you will gain 1800m / 5,900 ft of elevation over snow, ice and rock.

The ridge is easier to get up when there is more snow. This is earlier in the season though. As the temperatures increase, the glacier retreats further and the route becomes more technical.

It takes approximately 9 hours to reach the summit of Salkantay Mountain from your camp at 5,500m / 1,800ft, plus another 4 hours to return to camp.